We started feeling homesick, missing friends and family while we were in Montana, so we decided to head back east about a month early. We did some crazy, long drives for 4 days.

The first day we didn’t even make it out of Montana, that is one big state! We spent the second night in South Dakota and had our first tornado scare. We were in the RV eating dinner during a thunderstorm, when we suddenly heard tornado sirens. We looked outside and saw lights flashing at the campground laundry room (I assume that is to let us know where to go for shelter), so we grabbed the cat and made a run for it.

We hid out under tables in the laundry room while praying and waiting out the storm. Thankfully the storm passed quickly and we survived to tell about it. 😉

The third night we spent in Kansas City, and then finally made it to St. Louis on day 4. We spent a few days exploring St. Louis with our good friends the Santo Tomas family.

We knew the Santo Tomas family when we lived in Fernandina Beach. Rachel & I got to know each other in our homeschool group co-op back then. They are a military family and also live in their RV. They are now stationed in St. Louis, and it was so nice to catch up with them there.

St. Louis is amazing with so many awesome things to see and do! If you’ve followed me long enough, you know I am NOT a city person and typically avoid cities at all costs. However, visiting a city with another family that is familiar with the area, and had access to a shuttle that would do the driving for us, made visiting this city easy and fun.

Our first stop was the Gateway Arch, a must-do in St. Louis. We rode to the top of the arch in the little pods.

Inside the pod heading up to the top of the arch 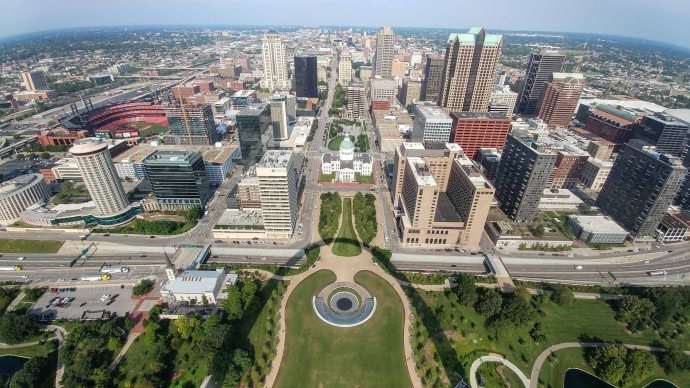 View of the city from the top of the arch

At the top of the arch 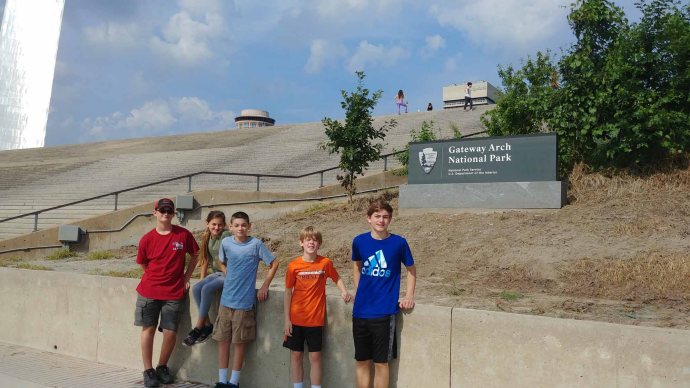 After visiting the arch we went to the City Museum, another must-do in St. Louis. This museum is a several-stories-high giant playground that is fun for both adults and children. 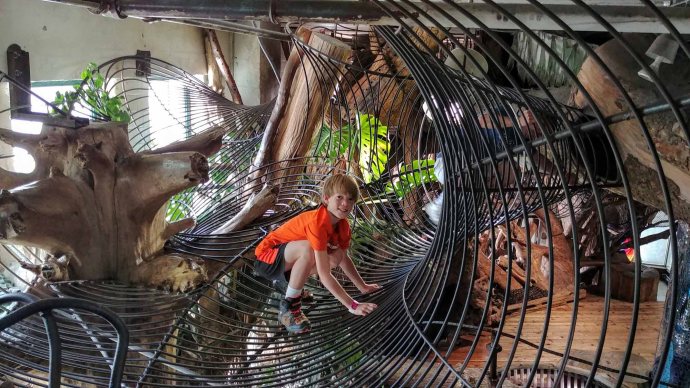 Even the adults have fun! 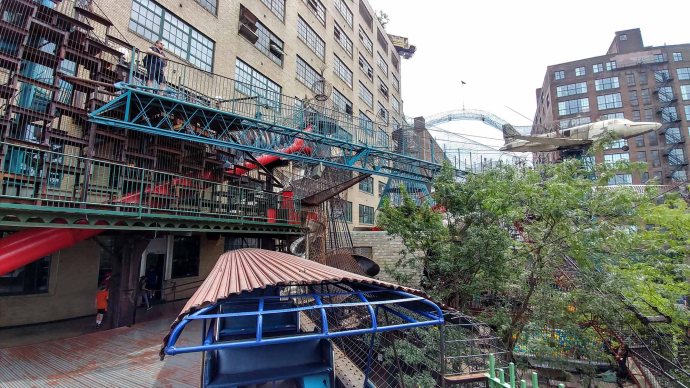 Another day we visited the St. Louis Zoo and Science Center, both are free!

We had such a great time visiting the Santo Tomas family, we were all sad to leave! I think we’ll be seeing more of them next year though, so instead of saying “good bye”, we say “see you next time!”

After we left St. Louis, we spent a night near Nashville, then the next day arrived in Georgia to visit my sister and brother-in-law for a few days. Then we headed on to Florida and parked (or moochdocked) at the Reyes’ house for a few days.

Hurricane Dorian was heading to Florida at this time, and we had plans to arrive at Disney’s Ft. Wilderness Campground on Labor Day. We kept an eye on the hurricane while at the Reyes’ house, while trying to decide if we needed to leave Florida or not.

Imagine! We just drove such a long way from Montana, only to get back to Florida just in time for a hurricane! Did we come back too early? Stay tuned for that story next.

Rally Time in the Ozarks

We just spent a couple of weeks in Branson, Missouri.  Branson is one of the friendliest towns we have ever been to.  People are just so nice and polite there!  We went to Branson to attend the Fulltime Families NOT Back to School Roadshool Rally.  Don’t let the name fool you.  Our kids may not be sitting behind a desk in school all day, but there was plenty of learning (or roadschooling) going on.

It was awesome to re-connect with friends we met at the last rally and to meet some new friends.  The rally was super fun with many fun family activities like campground games, s’mores night, 80’s night, and a movie under the stars featuring what else but the movie RV (my favorite!). 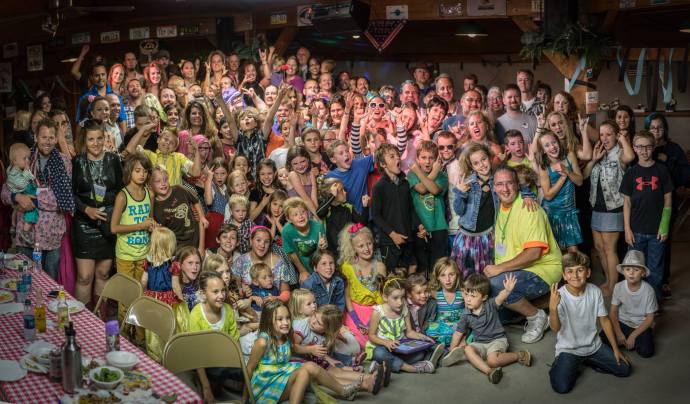 We also went on several field trips.  First we hiked to a waterfall.

My Florida boys thought the water was too cold, but the other kids didn’t seem to mind it.  They must not be from Florida!

We went to the Titanic Museum.  This museum has many artifacts from the Titanic and you can learn all about the ship and its passengers.  It was so interesting, but unfortunately we were not allowed to take any pictures inside the museum.  At the beginning of the field trip we were each given a boarding pass with the name of a real passenger on the Titanic.  The boarding pass had some information about the passenger and let you know what class they were in.  At the end of the museum you found out if your passenger survived.  Jake and Jesse each received a pass with the name of a little boy who was in third class.  Their passengers both survived.  Chris’s passenger was a crew member who also survived.  My passenger did not survive, but she was a hero.  She was in first class and had gotten on a lifeboat, but then she gave up her seat to a mother and child.

We also went to see the Jonah show at the Sights and Sounds Theater which was a really awesome show, but again we were not able to take pictures during the show.

Another show we attended was the Shoji Tabuchi show.  The Fulltime Families group was honored to be invited to this show for free.  Shoji Tabuchi is an extremely talented violinist from Japan.  The show is very entertaining and has a wide variety of music from swing and polka to country and pop.  The show consisted of a very talented group of musicians, singers and dancers. 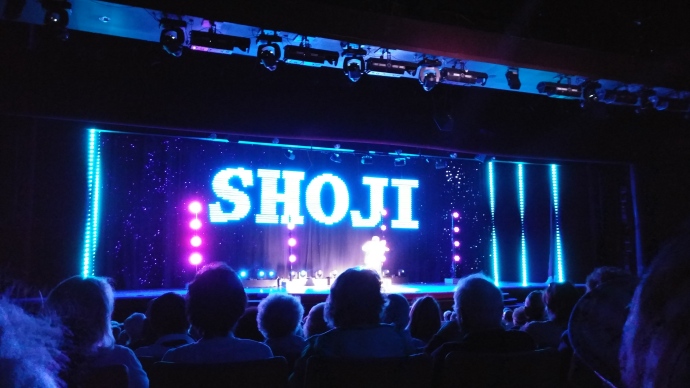 This theater is known as having “America’s Best Restrooms”.  I heard the men’s room even has a billiard table! 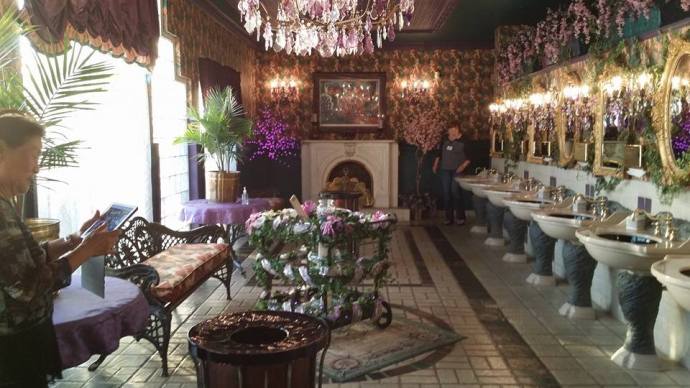 We went on several fields trips with our good friends, the Graham family.  We toured the College of the Ozarks.  I was so impressed with this college.  The students all work on campus to earn free tuition.  When they graduate they leave with no student loan debt.  They are also taught to work very hard which is why the college is also known as Hard Work U.  Beautiful views of the Ozarks from the college.

The college is a Christian college and displays the Ten Commandments.  One thing I found interesting was that several students rode their bikes to class and just left their bikes outside the buildings without locking them.  Hmm, it’s funny how that works when people are taught “thou shalt not steal”.  Too bad they no longer teach that in public school.

Words to live by… 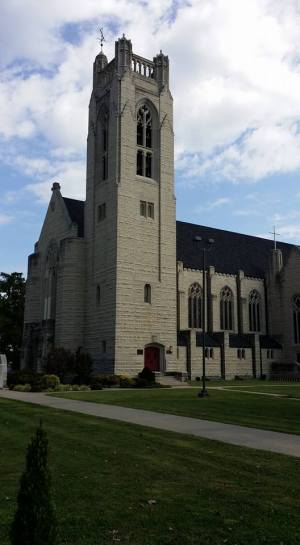 The mill was very cool.  We met some of the students that were working on weaving and basket making.  It was so interesting to watch how she made a table runner on this weaving loom.

Outside of the mill. 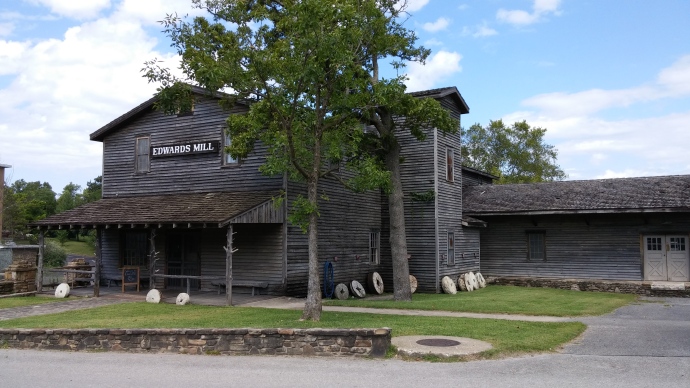 Another day we went to the Shepherd of the Hills Fish Hatchery where we learned how they breed trout to later be released into Lake Taneycomo.  We watched an interesting short film in the visitor center that explained the whole process.  The visitor center also had lots of reptiles for us to check out. 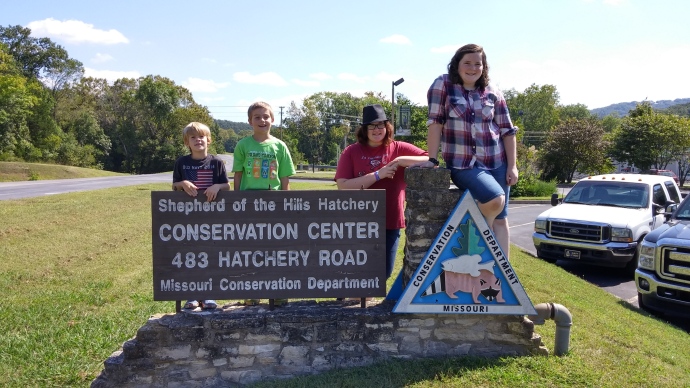 Touching an albino king snake.  I was surprised how soft this snake felt.  Not slimy like they look, but very soft. 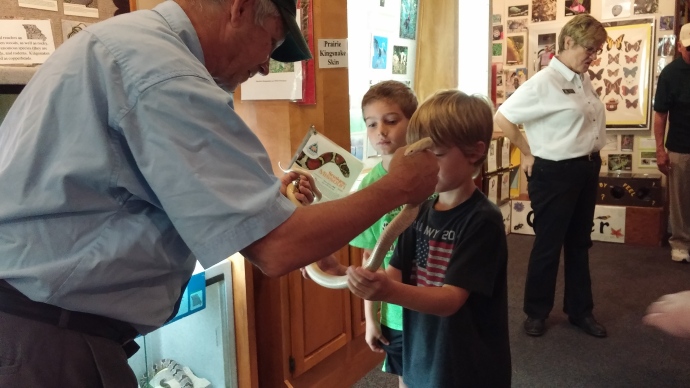 Feeding the fish so they can grow up to be released into the lake for the fishermen.  I guess this is what they call “farm raised fish”? 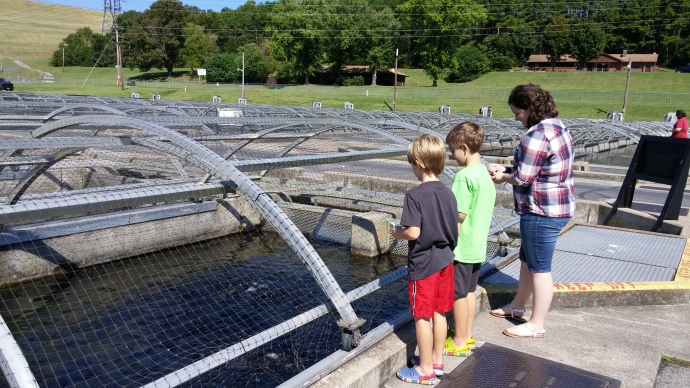 Watching some fly fishermen in the lake. 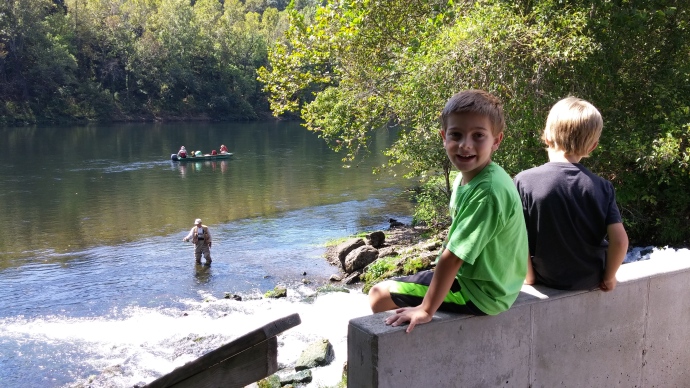 Then we went to the Table Rock Lake dam.  The visitor center there was also very interesting where we learned all about how they built the dam, and that they had to build it due to flooding problems.  The visitor center also had a lot of educational and fun things for the kids to play with. 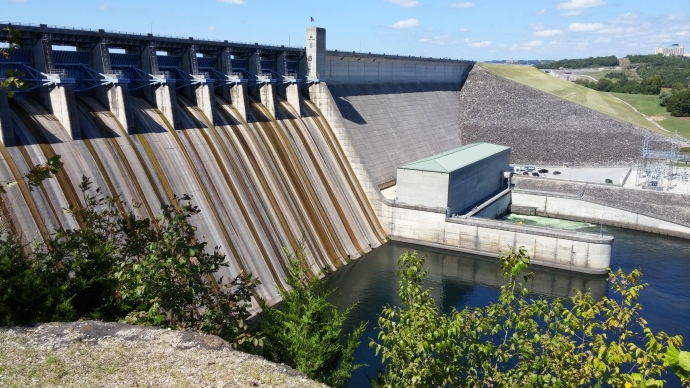 The beautiful Graham family.  I love these people!

Another day we went on a hike to some caves at Lakeside Forest Wilderness Area. 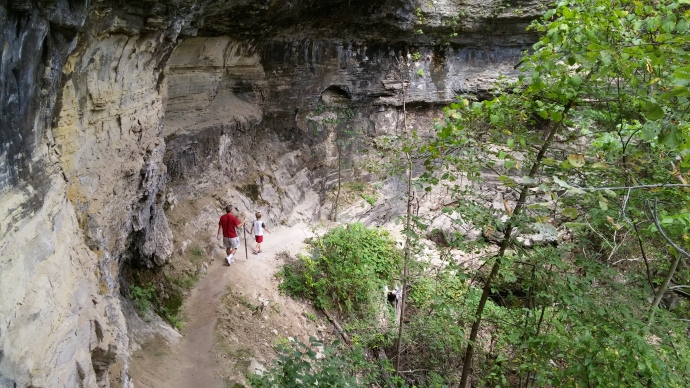 We walked into this cave and thankfully didn’t run into any wild animals, but there were a lot of spiders.  It was creepy!! 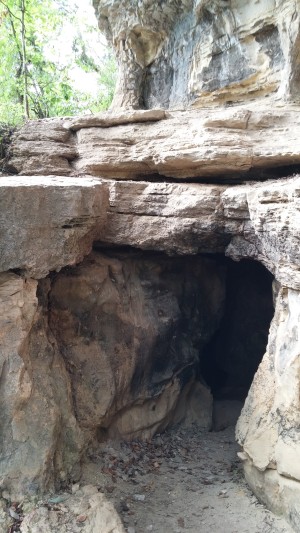 We celebrated Jesse’s 9th birthday at Lambert’s (Home of the Throwed Rolls).  We had never been to a Lambert’s before but I have heard of them.  I imagined we would be getting hit in the head with rolls the whole night, but it wasn’t really like that.  They came around regularly with rolls and if you want one you hold up your hands to catch it and they throw them to you.  They also regularly bring “pass-arounds” to your table which are several different side items and you can have as much as you want.  Between the rolls and pass-arounds we hardly had room for our dinner.  The place really knows how to feed people and you will not leave hungry!  The food was delicious and it was a really fun night.  We were very thankful to have the Grahams join us for Jesse’s birthday celebration.  After dinner we all went back to their RV for a fun game night. 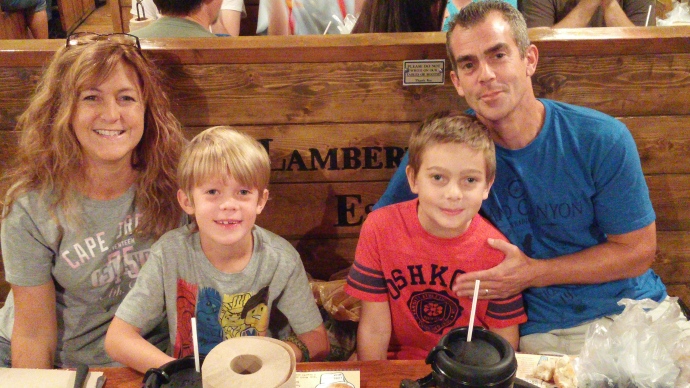 Fat Cat enjoyed her time at the rally too!  Here she is guarding the door.  She’s such a good watch-cat.

And she liked lounging in a beach chair.

Some other things we did included a visit to Stone Hill Winery and a date night at Branson Landing with our friends.  The nighttime light show at the landing is really cool!  This has been a really busy 2 weeks!  Next we’re going to rest up for a week in Tennessee before we meet up with our friends again.