We attended our 4th Fulltime Families (FtF) rally in Montrose, CO.  It was a total blast!  We met up with some families that we met at previous rallies and also some new families.  Some of our favorite memories on the road have been spent with other traveling families.

The rally was held at the Jellystone Park in Montrose, CO.  We went a few days earlier than the rally started which gave us some time to catch up with some other friends that got there a little early.  We went back to Ouray to visit Box Canyon Falls with the Lundy family.  The falls were really cool!  The water coming through the canyon is so powerful and loud! 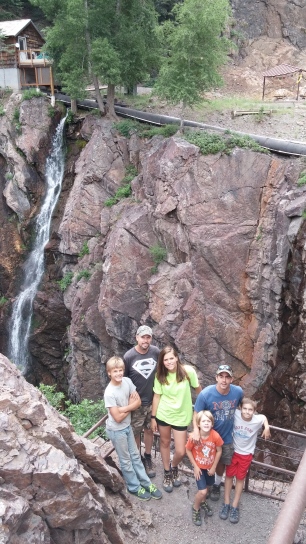 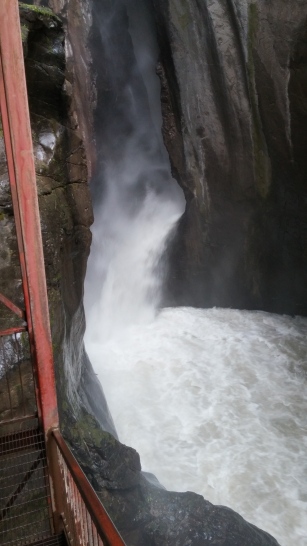 I can’t even explain just how much fun it is to be parked next to several other traveling families.  We hung out every evening for campfires and happy hours and talked until late into the night.  Meanwhile the kids were off and running from sunup until sundown (and beyond) having a blast playing with all the other kids.

One afternoon when it was raining outside, several kids ended up at our RV to play with play-doh. Or I should say “to make a mess” because you know that’s how it goes with play-doh! 😉 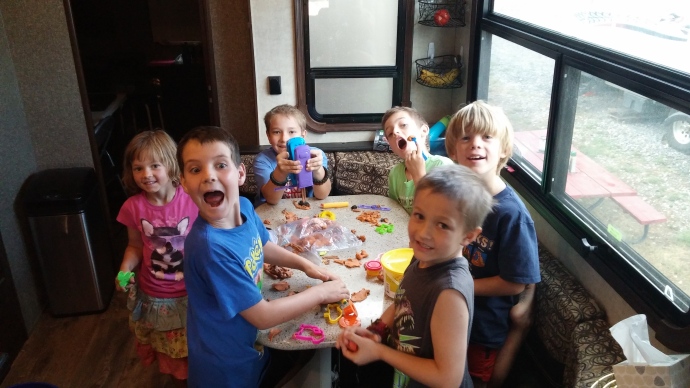 One of the planned activities was an obstacle course for the kids where they went to each “booth” for an activity to complete.  At this table the activity was to paint a mask because the theme of this rally was “Super Heroes”. 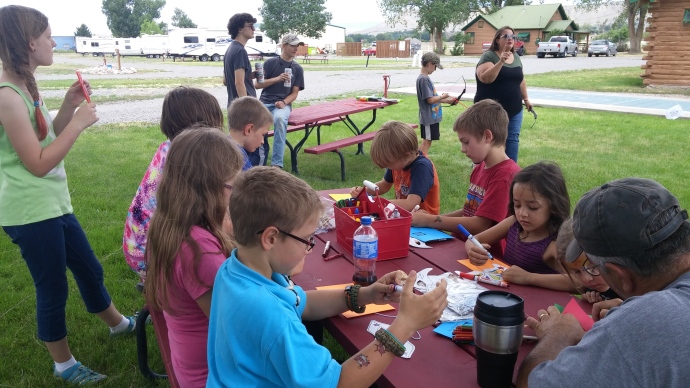 Jesse’s friend Dylan was showing him how to use the bow & arrow to shoot the colored soda bottles. 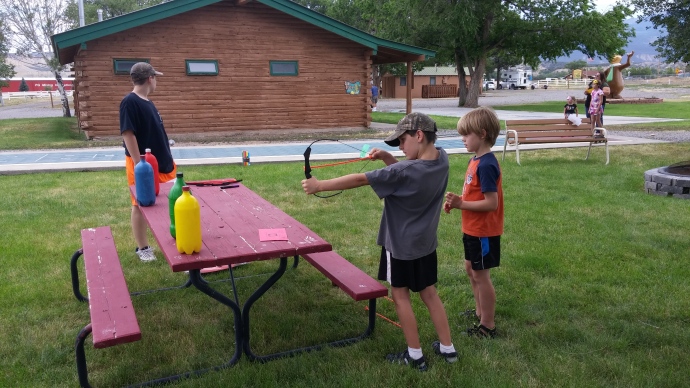 I love Olivia’s face in this one.  She is determined to hit that soda bottle!

After everyone completed the obstacle course, they all gathered around the Yogi Bear statue for a picture.

One of our favorite activities was the Super Hero Pet Parade.  We made a cape for Super Fat Cat to wear.  She was not happy about being paraded around the campground, but she really tolerated it well.  And she became famous!  After that everyone knew who Fat Cat was, and whenever people passed by our site they would say “hey, there’s Fat Cat!” 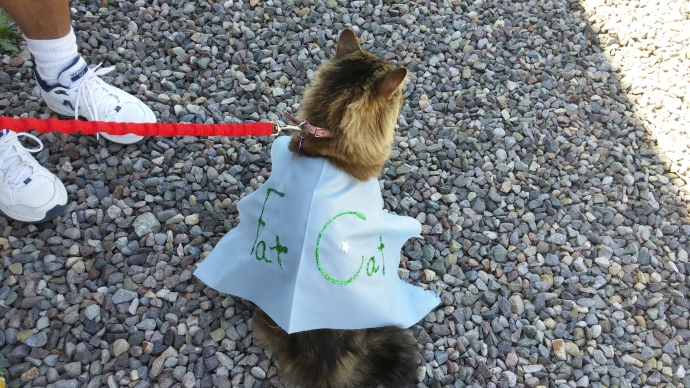 There were all kinds of pets in this parade including frogs and rats. 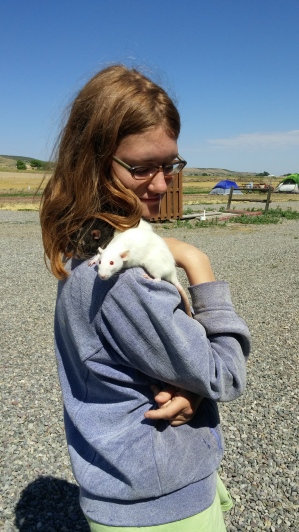 And dogs of course!

And even stuffed animals!

Once the parade started, Fat Cat tried to fly away.  Too bad her cape didn’t have real super powers!

Strangely, the pool at this campground was closed for most of the time we were there (even though it was well past Memorial Day and the weather was in the 90s).  I say “strangely” because this is supposed to be a Jellystone Park, but it wasn’t like any other Jellystone we have been to.  They did not have nearly as many fun activities and amenities as most Jellystone Parks have, but we made up for that with our own FtF activities.  The pool finally opened a couple of days before we left so the kids wanted to make the most of it while they had the chance.

On Saturday night we had the Super Hero pizza dinner and dance party.  Clementine had a really cool costume!

Jennifer made us feel tall by making herself look short next to us. 🙂

Our last night around the campfire was really fun.  I think we stayed out so late because we knew we were leaving the next day and wanted to make the fun last as long as possible. 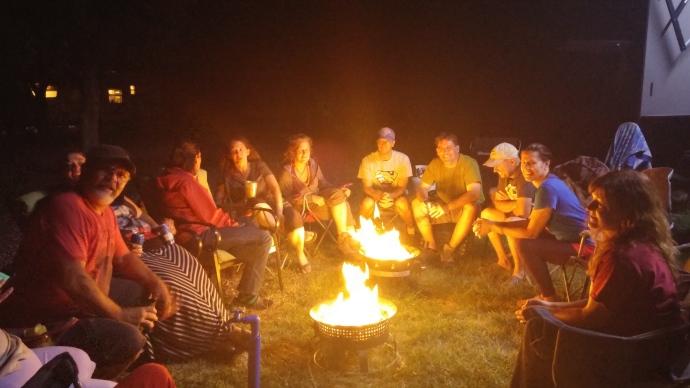 I miss these girls!

If you are a traveling family, I would highly recommend you find a Fulltime Families rally near you and go.  We have made the most amazing friendships and memories at these rallies!

One last silly picture of the super heroes. 🙂

Black Canyon of the Gunnison National Park is in Montrose, Colorado. 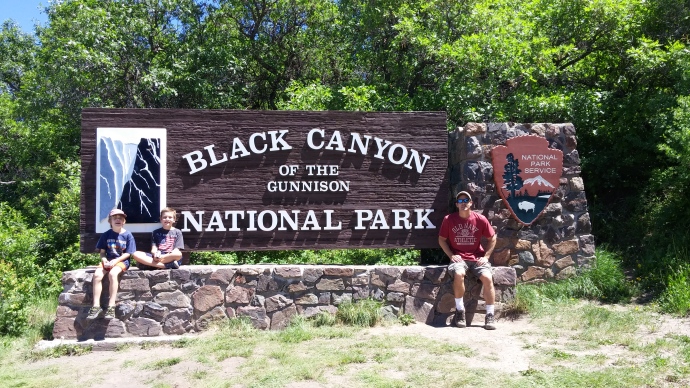 The Gunnison River winds through the bottom of the canyon.

This park has many beautiful viewpoints and a few hiking trails.  We only spent a few hours there because it was a very hot day, but we managed to see some awesome views and hiked one trail. 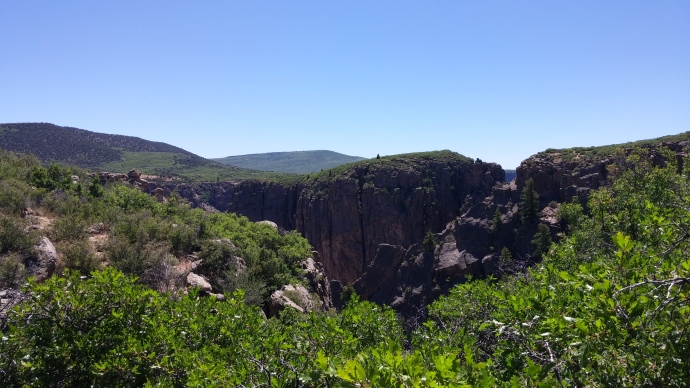 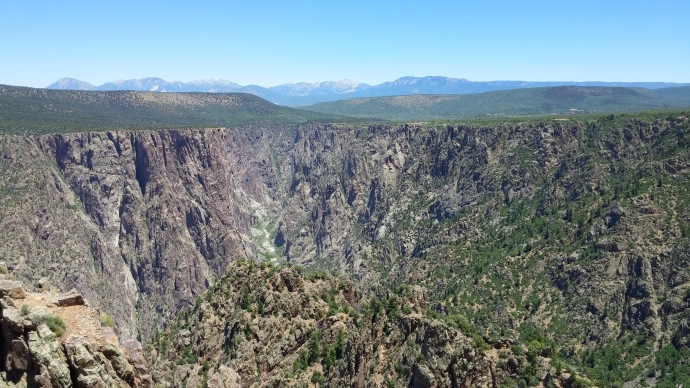 We enjoyed our visit in spite of the heat, but I think it would be more fun to explore this park when the weather is a little cooler.